Basel, April 29, 2014 - Novartis announced today that the US Food and Drug Administration (FDA) has approved Zykadia(TM) (ceritinib, previously known as LDK378) for the treatment of patients with anaplastic lymphoma kinase-positive (ALK+) metastatic non-small cell lung cancer (NSCLC) who have progressed on or are intolerant to crizotinib[1]. 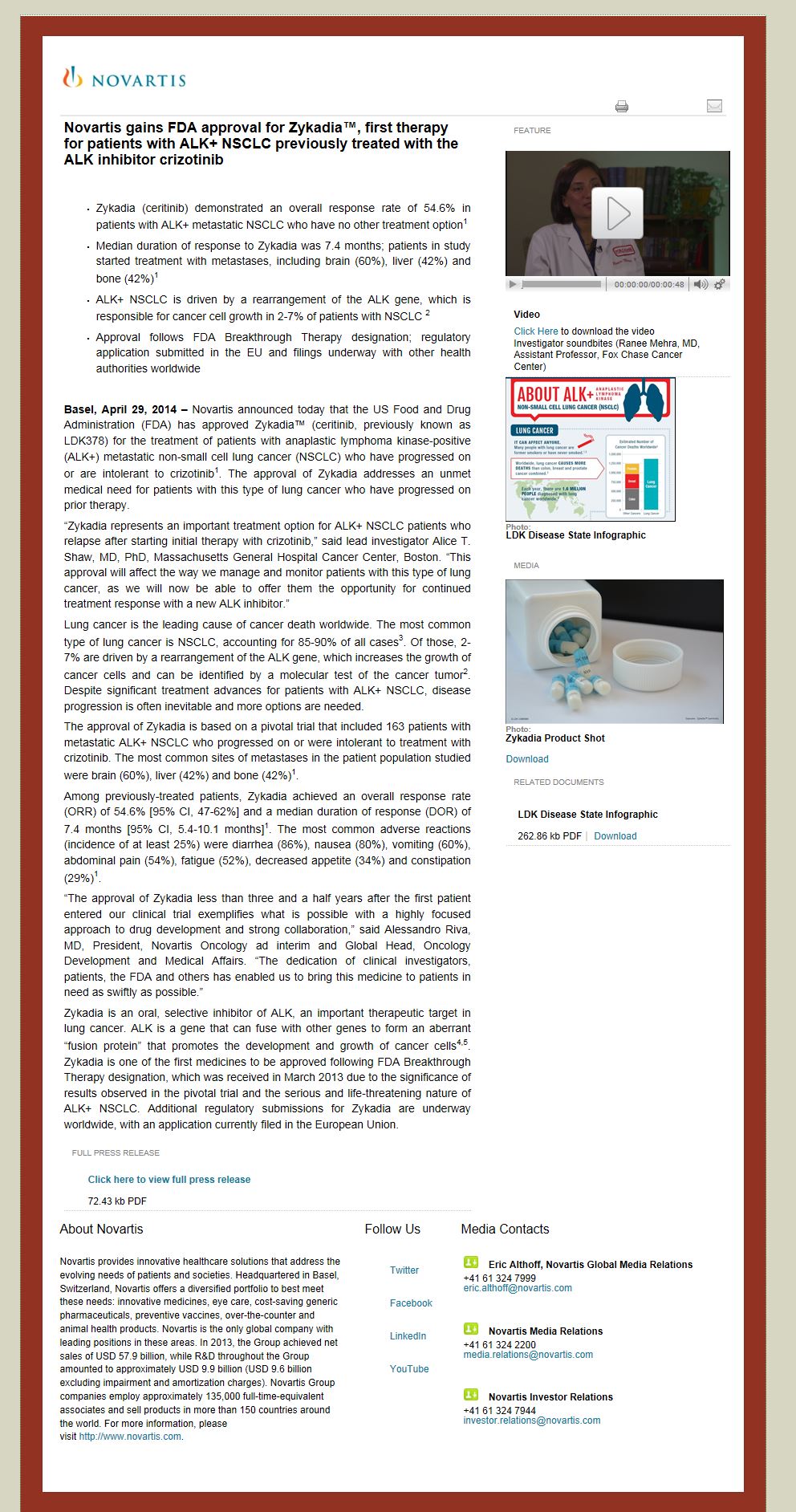 Basel, April 29, 2014 - Novartis announced today that the US Food and Drug Administration (FDA) has approved Zykadia(TM) (ceritinib, previously known as LDK378) for the treatment of patients with anaplastic lymphoma kinase-positive (ALK+) metastatic non-small cell lung cancer (NSCLC) who have progressed on or are intolerant to crizotinib[1]. The approval of Zykadia addresses an unmet medical need for patients with this type of lung cancer who have progressed on prior therapy.

"Zykadia represents an important treatment option for ALK+ NSCLC patients who relapse after starting initial therapy with crizotinib," said lead investigator Alice T. Shaw, MD, PhD, Massachusetts General Hospital Cancer Center, Boston. "This approval will affect the way we manage and monitor patients with this type of lung cancer, as we will now be able to offer them the opportunity for continued treatment response with a new ALK inhibitor."

Lung cancer is the leading cause of cancer death worldwide. The most common type of lung cancer is NSCLC, accounting for 85-90% of all cases[3]. Of those, 2-7% are driven by a rearrangement of the ALK gene, which increases the growth of cancer cells and can be identified by a molecular test of the cancer tumor[2]. Despite significant treatment advances for patients with ALK+ NSCLC, disease progression is often inevitable and more options are needed.

The approval of Zykadia is based on a pivotal trial that included 163 patients with metastatic ALK+ NSCLC who progressed on or were intolerant to treatment with crizotinib. The most common sites of metastases in the patient population studied were brain (60%), liver (42%) and bone (42%)[1].

"The approval of Zykadia less than three and a half years after the first patient entered our clinical trial exemplifies what is possible with a highly focused approach to drug development and strong collaboration," said Alessandro Riva, MD, President, Novartis Oncology ad interim and Global Head, Oncology Development and Medical Affairs. "The dedication of clinical investigators, patients, the FDA and others has enabled us to bring this medicine to patients in need as swiftly as possible."

Zykadia is an oral, selective inhibitor of ALK, an important therapeutic target in lung cancer. ALK is a gene that can fuse with other genes to form an aberrant "fusion protein" that promotes the development and growth of cancer cells[4],[5]. Zykadia is one of the first medicines to be approved following FDA Breakthrough Therapy designation, which was received in March 2013 due to the significance of results observed in the pivotal trial and the serious and life-threatening nature of ALK+ NSCLC. Additional regulatory submissions for Zykadia are underway worldwide, with an application currently filed in the European Union.

About the pivotal trial and Zykadia clinical trial program
The efficacy of Zykadia was established in a multicenter, single-arm, open-label clinical trial. A total of 163 patients with metastatic ALK+ NSCLC who progressed on or were intolerant to treatment with crizotinib were enrolled and treated at a Zykadia dose of 750 mg once daily. The major efficacy outcome measure was ORR according to RECIST v1.0 as evaluated by both investigators and a Blinded Independent Central Review Committee (BIRC). DOR was an additional outcome measure[1].

This study is part of the ongoing Novartis clinical trial program in this patient population. Several major studies evaluating treatment with ceritinib are being conducted in more than 300 study centers across more than 30 countries. Two Phase II single-arm clinical trials in previously-treated and treatment-naïve ALK+ NSCLC patients, (www.clinicaltrials.gov identifiers NCT01685060 and NCT01685138), are fully enrolled and ongoing. In addition, two Phase III clinical trials comparing ceritinib with chemotherapy in treatment-naïve and in previously-treated patients, (www.clinicaltrials.gov identifiers NCT01828099 and NCT01828112), are ongoing and actively recruiting patients worldwide[6],[7],[8],[9].

About Zykadia
Zykadia (ceritinib) is indicated for the treatment of patients with ALK+ metastatic NSCLC who have progressed on or are intolerant to crizotinib. This indication is approved under accelerated approval based on tumor response rate and duration of response. An improvement in survival or disease-related symptoms has not been established. Continued approval for this indication may be contingent upon verification and description of clinical benefit in confirmatory trials.

Drug-induced hepatotoxicity occurred in patients treated with Zykadia. Elevations in alanine aminotransferase (ALT) greater than 5 times the upper limit of normal (ULN) occurred in 27% of 255 patients in Study 1. One patient (0.4%) required permanent discontinuation due to elevated transaminases and jaundice. Patients should be monitored with liver laboratory tests including ALT, aspartate aminotransferase (AST), and total bilirubin once a month and as clinically indicated, with more frequent testing in patients who develop transaminase elevations. Based on the severity of the adverse drug reaction, withhold Zykadia with resumption at a reduced dose, or permanently discontinue Zykadia as described in Table 1 of the package insert.

Hyperglycemia can occur in patients receiving Zykadia. In Study 1, CTCAE Grade 3-4 hyperglycemia, based on laboratory values, occurred in 13% of 255 patients. There was a 6-fold increase in the risk of CTCAE Grade 3-4 hyperglycemia in patients with diabetes or glucose intolerance and a 2-fold increase in patients taking corticosteroids. Monitor serum glucose levels as clinically indicated. Initiate or optimize anti-hyperglycemic medications as indicated. Based on the severity of the adverse drug reaction, withhold Zykadia until hyperglycemia is adequately controlled, then resume Zykadia at a reduced dose as described in Table 1 of the package insert. If adequate hyperglycemic control cannot be achieved with optimal medical management, permanently discontinue Zykadia.

Based on its mechanism of action, Zykadia may cause fetal harm when administered to a pregnant woman. In animal studies, administration of ceritinib to rats and rabbits during organogenesis at maternal plasma exposures below the recommended human dose of 750 mg daily caused increases in skeletal anomalies in rats and rabbits. Apprise women of reproductive potential of the potential hazard to a fetus. Advise females of reproductive potential to use effective contraception during treatment with Zykadia and for at least 2 weeks following completion of therapy.

Outside of the US, Zykadia (LDK378) is an investigational agent and has not been approved by regulatory authorities.

Disclaimer
The foregoing release contains forward-looking statements that can be identified by words such as "Breakthrough Therapy," "underway," "will," "offer," "opportunity," "inevitable," "possible," "can," "ongoing," "being conducted," "may," or similar terms, or by express or implied discussions regarding potential additional marketing authorizations for Zykadia, potential new indications or labeling for Zykadia, or potential future revenues from Zykadia. You should not place undue reliance on these statements. Such forward-looking statements are based on the current beliefs and expectations of management regarding future events, and are subject to significant known and unknown risks and uncertainties. Should one or more of these risks or uncertainties materialize, or should underlying assumptions prove incorrect, actual results may vary materially from those set forth in the forward-looking statements. There can be no guarantee that Zykadia will be approved for sale in any market where it has been submitted, or that it will be submitted or approved for sale in any additional markets, or at any particular time. Neither can there be any guarantee that Zykadia will be submitted or approved for any additional indications or labeling in any market, or at any particular time. Nor can there be any guarantee that Zykadia will be commercially successful in the future. In particular, management's expectations regarding Zykadia could be affected by, among other things, unexpected regulatory actions or delays or government regulation generally; the uncertainties inherent in research and development, including unexpected clinical trial results and additional analysis of existing clinical data; the company's ability to obtain or maintain proprietary intellectual property protection; general economic and industry conditions; global trends toward health care cost containment, including ongoing pricing pressures; unexpected manufacturing issues, and other risks and factors referred to in Novartis AG's current Form 20-F on file with the US Securities and Exchange Commission. Novartis is providing the information in this press release as of this date and does not undertake any obligation to update any forward-looking statements contained in this press release as a result of new information, future events or otherwise.